Press: Stars Dazzle At The Dancing With Heroes Fundraiser

Celebrities were out in force on Saturday night to pledge their support to the country's military heroes.

Claire Sweeney, 51, dazzled in a sequinned gown as she and a glitzy Lizzie Cundy, 54, led the red carpet glamour at the Dancing with Heroes fundraiser at the Landmark Hotel in London's Marylebone 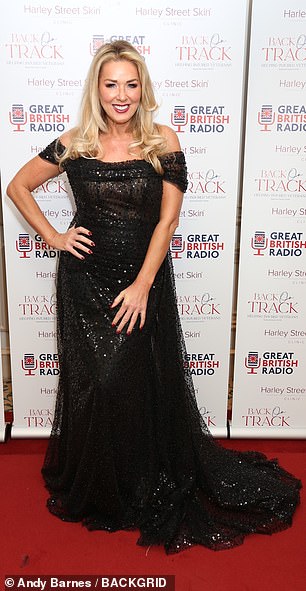 The former Brookside icon looked incredible in her classic black dress, which trailed elegantly onto the floor as she posed for photographs on arrival... see the rest of the article here

Some of Britain’s most popular celebrities will be pledging their support to our military heroes by attending the glittering Dancing with Heroes ball at the Landmark Hotel in Marylebone on Saturday 26th November.

Luminaries including Stephanie Beecham (Dynasty), Beverley Callard (Coronation Street), Sherrie Hewson (Benidorm), Katherine Kelly (Coronation Street), Tony Pitts (Peaky Blinders), Glynis Barber (Hollyoaks) and Michael Brandon (Dempsey & Makepeace) will help to raise much needed funds for the pioneering charity Back on Track which brings the theatre of war to the medical theatre by providing surgical and medical treatment to former servicemen and women who have been disfigured in action.

The charity, which was founded by leading aesthetics professional, Dr Aamer Khan and his wife Lesley Reynolds of Harley Street Skin, works with British servicemen and women particularly in the field of scar tissue reduction, thus enabling their patients to face the world again. For his remarkable reconstructive work, Dr Khan has won a Soldering On and Best magazine award.

Guests will be treated to a full evening of comedy and musical entertainment with a highlight being performances by 80's superstars Imagination and Sinitta, opera by Freidericke Krum, dance by Robin Windsor and Joanne Clifton who appeared on Strictly Come Dancing and comedy by Mike Osman famed for his uproarious Trump impressions.

Funds raised from the evening will go towards the continuance of Back on Track’s ground-breaking work to rehabilitate and resettle into society, former members of the armed forces who have been wounded, physically or psychologically, by providing or assisting in the provision of medical treatment including reconstructive surgery, as well as emotional and psychological support including dance therapy.

Speaking on the night, the charity's founder Lesley Reynolds, said: “Our wonderful team at Back on Track works hard to rehabilitate and resettle into society, former members of the armed forces who have been wounded, physically or psychologically, by providing or assisting in the provision of medical treatment including reconstructive surgery, emotional and psychological support and practical support.”

Charity patron Vicki Michelle said: "British troops are recognised as the best in the world and are true heroes, but even heroes get hurt. Some injuries are psychological, but often limbs are lost or severely damaged, and most wounds cause extensive scarring. Many casualties are young men and women in the prime of their lives whose confidence has been destroyed along with their bodies. Many believe that they will never be able to lead normal lives again. Back on Track is a small charity that is making a real difference."

Back on Track offers a holistic approach to rehabilitation for injured and disfigured servicemen and women and stages annual karting races which have proved popular with veterans and celebrities alike including the charity's patron Andrea McLean, who explains: "The thrill of hurtling around the track, competing against injured, and able-bodied drivers, and boosted endorphins has proven to do wonders for their confidence and speeded up the whole recovery process.

“It is an honour to dance with our heroes tonight. Back on Track has not only achieved wonderful surgical results, but their support gives our heroes a brighter future.”

The Dancing with Heroes fundraiser was founded by Dr Aamer Khan - the founder of the prestigious Harley Street Skin clinic. Dr Khan has been recognised for his services to healthcare with a British Citizen Award.

The award is given to those who have made an exceptional difference in their field, positively impacting other peoples’ lives. It is celebrated with a ceremony at the Palace of Westminster, however, due to Covid-19 restrictions this year, it has not gone ahead.

Aside from his award-winning work in the field of aesthetics, Dr Khan is a pioneer in regenerative medicine, including wound healing and reconstructive surgery. For the last 6 years he has been working with British servicemen and women, including injured service personnel who have sustained severe burns and badly damaged or lost limbs in Afghanistan and elsewhere.

Dr Khan explains: “Six years ago, I met a hugely courageous young man called Mark Allen. He was a double amputee and burns victim and I wanted to do all I could to help him. That was the beginning of the journey."

Since then Dr Khan and his wife Lesley Reynolds have founded the charity Back on Track and continue to provide treatment to former members of the armed forces who have been wounded, not just physically but psychologically. The charity also provides rehabilitation, resettlement and financial support.

Dr Khan said: “Veterans have fought for our country, yet our society often lets them down after injury, leaving them with very little support.

“The most positive outcome has been seeing these remarkable young men and women flourish and their confidence return, they are the ones that really deserve the recognition," he added.

Dr Khan adds the British Citizen Award to the Soldiering On award and Best Heroes Award.

Read the rest of the article on https://www.dailymail.co.uk/tvshowbiz/article-11472847/Claire-Sweeney-Lizzie-Cundy-lead-glamour-Dancing-Heroes-fundraiser.html